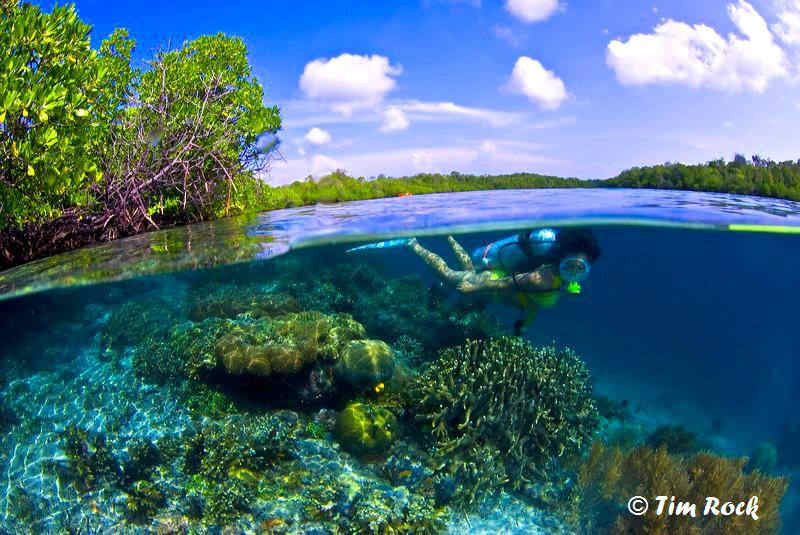 Mangroves are the rainforests by the Sea.
Mangals are highly biodiverse habitats that host a large variety of unique organisms from barnacles and oysters to fiddler crabs, mudskippers or even near-endemics like Costa Rica’s Mangrove Hummingbird or PNG’s Sheathtail Bat and various birds. They are also important nursery areas for many fresh water and reef Fishes and attract a whole host of predators ranging from predatory Fishes like the Mangrove Jack and Sharks to fish-eating birds like Egrets, Herons and Ibises all the way to a wide variety of reptiles like Water Moccasins, Turtles and Crocodilians, and mammals like Otters and Raccoons.

Nutrients and carbon from mangrove forests provide essential support to other near shore marine ecosystems such as coral reefs and seagrass areas, and enrich coastal food webs and fishery production. The physical presence of Mangroves along the coastlines and rivers also provide the first line of defense against cyclones, high winds and storm surges.

It is estimated that globally, mangroves provide at least $1.6 billion, or US$ 900,000 per square kilometer in ecosystem services annually.
Such services include protecting foreshores, fisheries production and supply of building materials but also tourism, recreation and improving water quality.

Mangrove ecosystems are also one of the best, and largely overlooked Carbon Sinks.

As a consequence, conservation of mangroves and associated ecosystems has been identified as a key natural adaptation strategy and mitigation measure to climate change. Protecting these vital ecosystems also safeguards and enhances the livelihoods of coastal communities.

In the Pacific, mangrove habitats are acknowledged to be especially important to the traditional lifestyles of its people.
Apart from the physically protecting the coastlines, they are valuable sources of many different types of food, including fishes, crabs, prawns, shellfish, not to forget the seeds that are also consumed in many parts of the Pacific. Furthermore, Mangroves are an important source of firewood and building material for housing, as well as other products such as dyes that are used in masi-making.

Despite such values, Mangroves throughout the Pacific are being degraded or destroyed due to their use as rubbish dumps, overharvesting, reclamation to make way for tourist resorts, urban development, housing, and even due to the proliferation of squatter or informal settlements in the ‘no-mans’ mangrove areas.
The primary threats to all Mangrove species are habitat destruction and removal of mangrove areas for conversion to aquaculture, agriculture, urban and coastal development, and overexploitation. Of these, clear-felling, aquaculture and over-exploitation of fisheries in Mangroves are expected to be the greatest threats to mangrove species over the next 10–15 years. The consequences of this are catastrophic: as an example, it is estimated that the conversion of mangrove to aquaculture ponds could result in the release (from about 1,000 years accumulated mangrove sediments) of some 75 t C ha-1 yr-1 to the atmosphere over a 10-year period. This is 50 times the sequestering rate.

Climate change is also considered a threat to all mangrove species, particularly at the edges of a species range where sea temperature and other environmental changes may be greatest.
With a rise in sea level, the habitat requirements of each species will be disrupted, and species zones will suffer mortality in their present tidal zones and attempt to re-establish at higher elevations in areas that were previously landward zones. Mangrove species with a habitat on the landward margin are particularly vulnerable to sea-level rise if, owing to coastal development, their movement inland is blocked. Species that are easily dispersed, and grow or reproduce rapidly, such as Rhizophora spp may cope better than those which are slower growing and slower to reproduce such as Bruguiera spp, Ceriops spp, or Xylocarpus spp.

Globally, large stretches of the sub-tropical and tropical coastlines of Asia, Africa, Oceania, the Americas and the Caribbean are fringed by mangroves, once estimated to cover an area of over 32 million hectares – now, less than 15 million hectares remain – less than half the original area.
Between 20% and 35% of mangrove area has been lost since approximately 1980, and mangrove areas are disappearing at the rate of approximately 1% per year, with other estimates as high as 2–8% per year. These rates may be as high as or higher than rates of losses of upland tropical wet forests, and current exploitation rates are expected to continue unless mangrove forests are protected as a valuable resource.
Given their accelerating rate of loss, mangrove forests may at least functionally disappear in as little as 100 years.

The loss of individual mangrove species is also of great concern, especially as even pristine mangrove areas are species-poor compared with other tropical plant ecosystems.
A recent global assessment concludes that eleven of the 70 mangrove species (16%) are at elevated threat of extinction and will be placed on the IUCN Red List.
Particular areas of geographical concern include the Atlantic and Pacific coasts of Central America, where as many as 40% of mangroves species present are threatened with extinction.
Across the globe, mangrove species found primarily in the high intertidal and upstream estuarine zones, which often have specific freshwater requirements and patchy distributions, are the most threatened because they are often the first cleared for development of aquaculture and agriculture.

Urgent protection is needed for two mangrove species that are listed as Critically Endangered, the highest probability of extinction measured by the IUCN Red List, Sonneratia griffithii and Bruguiera hainesii.
Sonneratia griffithii is found in India and Southeast Asia, where 80% of the total mangrove area has been lost over the past 60 years. Bruguiera hainesii is an even rarer species and grows only in a few fragmented locations in Indonesia, Malaysia, Thailand, Myanmar, Singapore and Papua New Guinea. It is estimated that there are fewer than 250 mature trees of the species remaining.